“Look past your thoughts so you may drink the pure nectar of the moment.” – Rumi

Mindfulness seemed to be the new buzz word

“Be mindful” in numerous ways I had heard

My social media feeds were inundated

With mindfulness practices that were constantly updated

So drifting from one thought to another like I do

All the time, lost in the world wide web (it’s true)

I stumbled upon its concept and definition

It failed to make a mark on me despite repetition

Amid the various  images of women and men

Meditating in a yogic posture by the picturesque ocean

The one picture on mindfulness that caught my attention

Was one of Winnie the Pooh and Piglet’s conversation

Where Pooh asked what day it was; Piglet replied

The day was “today”- “My favorite day” is how Pooh described

The day, capturing in one sentence uttered in innocence

Of the practice of mindfulness, the entire essence..

So I jumped on the bandwagon with some trepidation

Mindfulness cures illnesses, but I had no expectations

My cell phone was chirping away, my mind would not allow

Me to get rid of racing thoughts, but I persisted

Gradually I warmed to the concept though my brain resisted

Being rooted in the present was something my hyperactive mind

Had not done before, but my thoughts finally began to unwind

Layer after layer of thoughts was slowly discarded

Finally with intense focus on the present I was rewarded

Once I grasped the concept, there was no turning back

Being mindful while doing everything, this became my life hack

In this day and age, with technology around

Being fully present in the moment is a lost art

With this small step, I have made a start! 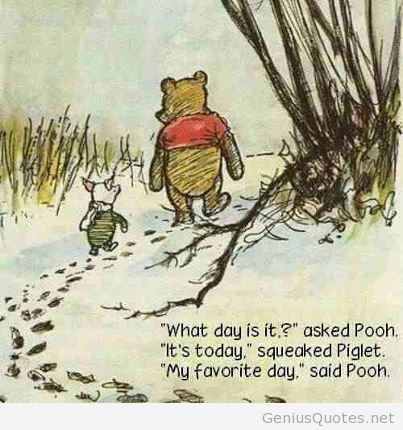 5 thoughts on “Empty out to be (mind)full”